Dom Hans van der Laan was a leading figure in the Bossche School. His theories on numerical ratios in architecture and furniture, in particular regarding the plastic number (plastisch getal) were very influential.

Van der Laan was the ninth of the eleven recorded children of Leiden architect Leo van der Laan (1864–1942) by his marriage to Anna Stadhouder (1871–1941). His brothers Jan van der Laan and Nico van der Laan also became architects. Hans studied architecture from 1923 to 1926 at the Technische Hogeschool of Delft, where M.J Granpré Molière was the dominant figure. Granpré Molière regarded his Catholic faith as inseparably bound up with architecture, a concept with which Van der Laan could not agree. He did not complete his course and in 1927 moved to St. Paul’s Abbey, Oosterhout, to become a Benedictine monk. He was ordained into the priesthood in 1934. Later he lived in St Benedictusberg Abbey at Mamelis near Vaals. As sacristan he developed a strong interest in the design of liturgical objects and church furnishings. His interest in architecture was also reawakened. He tried to find an answer to the question of which criteria the aesthetics of a building must meet, and developed a theory of numerical relationships in which the “plastic number”, a three-dimensional expression of the golden ratio, played a central part.

After WWII Van der Laan, with his brother Nico, led a course in Church Architecture in the Kruithuis in ‘s Hertogenbosch, using the early Christian basilica as an example, for training architects for the post-war reconstruction of Catholic churches and monasteries, and also of secular buildings. From these courses arose the Bossche School, a name given by opponents of the Van der Laan brothers and their followers. To illustrate his ideas about relationships he made use of two teaching aids developed by himself: the architectural abacus and the morphotheque, for two- and three-dimensional forms respectively.

Van der Laan designed only a few buildings, mostly Christian, not all of which were realised. Of which the most famous and best-known; the church of St. Benedictusberg Abbey (1967) at Mamelis (near Vaals). His design for the library of the same monastery was awarded the Limburg Architecture prize in 1989. The crypt, the sacristy and a courtyard or atrium there were also designed by him. (The rest of the premises date from the 1920s and are not by him). In Belgium he built Roosenberg Abbey at Waasmunster (Sisters of Mary, 1975). In Best a house with a patio was built to his designs (Naalden House, 1981). The last work to be executed from his designs was the monastery of the Benedictine nuns of Tomelilla in southern Sweden (largely finished in 1995). This is only a handful of buildings and interiors he designed alone.

Dom van der Laan was the founder and creator of the ‘plastic number’ which had a lot of followers. In a way he created all the furniture designed to those specs. One of the most important designers was his best pupil; Jan de Jong (Lith 1917 – 2001). He was the first of the architects from the Bossche School to choose a very strict and sober style, in which the measures and the proportions of the plastic number played the leading role in his designs. Hans van der Laan recognized him soon after as his most brilliant pupil. During the reconstruction period after WWII the Dutch architect Jan de Jong and Dom Hans van der Laan collaborated on several architectural projects including the interior furniture. They created an outstanding body of work defining the the style of the Bossche School. Jan de Jong was able to translate many of Dom v.d.Laan’s idealised concepts and ideas into pioneering buildings and spaces. They worked in such close collaboration however that it is difficult to discern the individual level of input into the furniture they designed. The artist Wim van Hoof worked with the two architects proposing different colour schemes for their projects. The original olive green surface visible on these tables derived from one of those schemes. 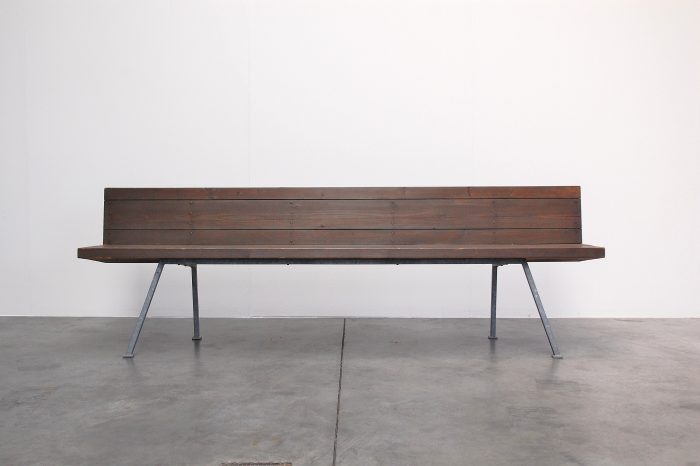 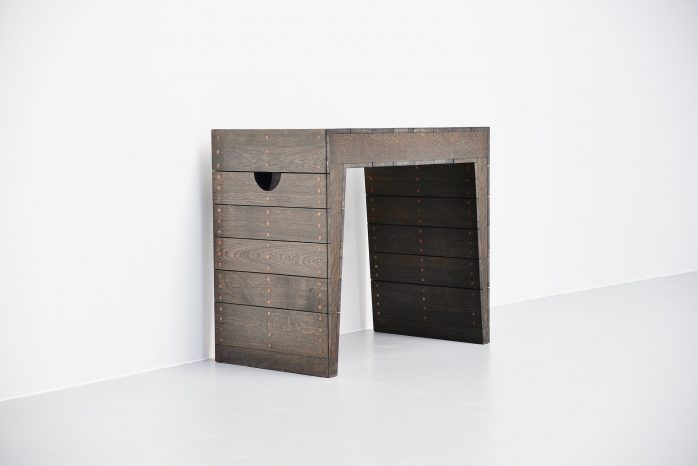 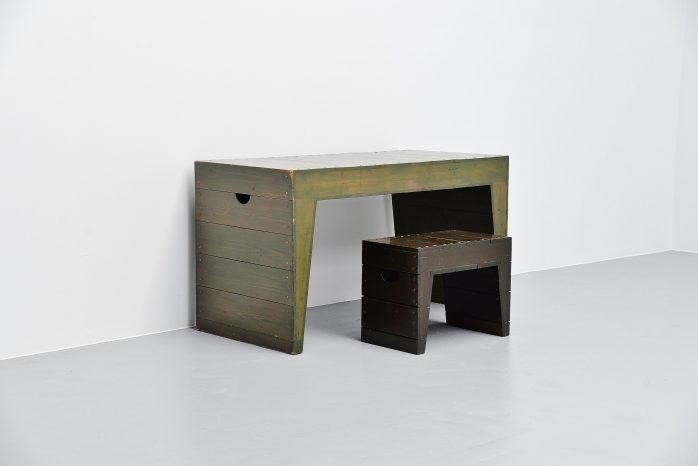 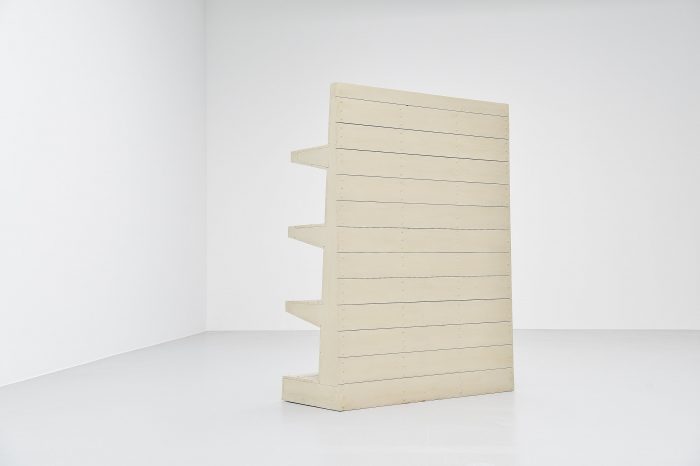 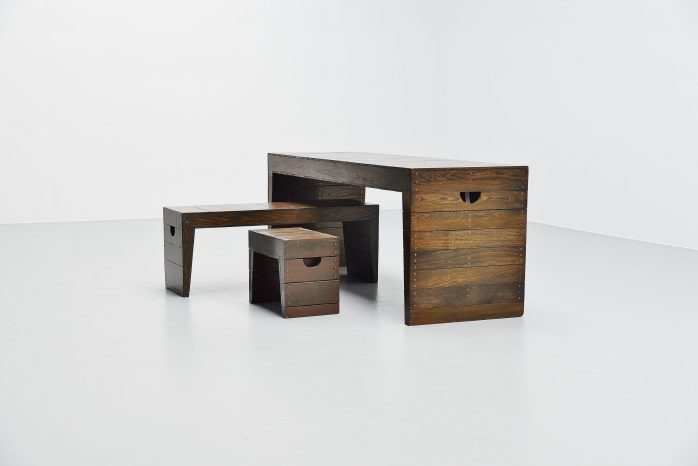 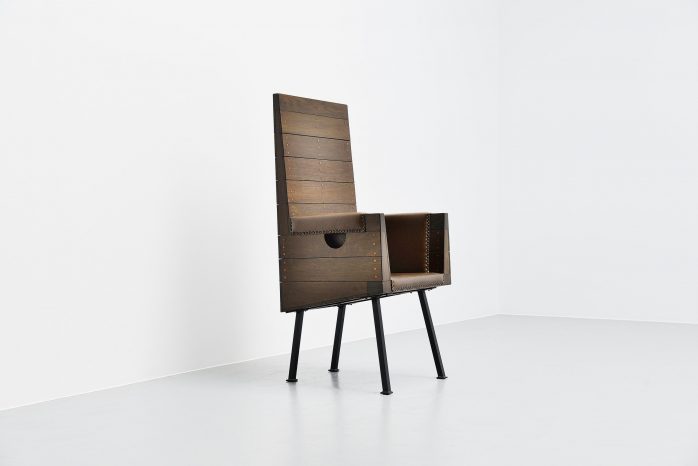 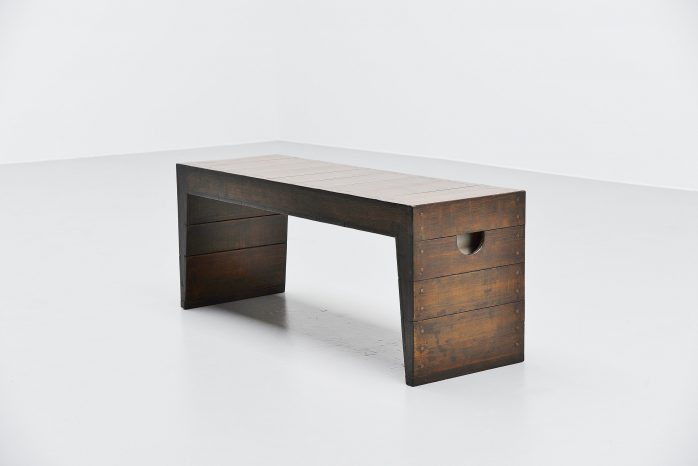 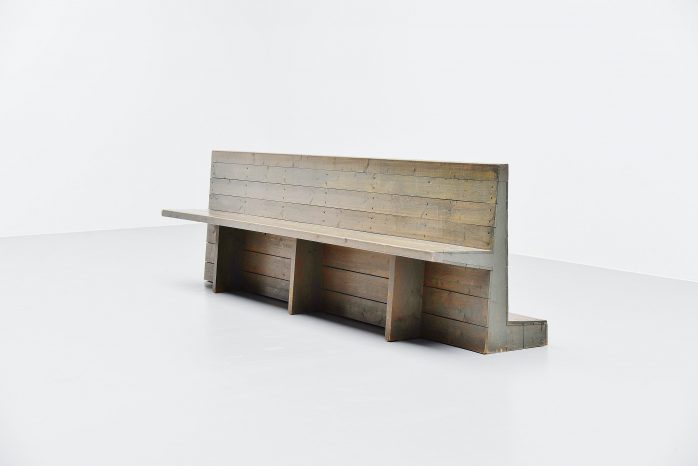 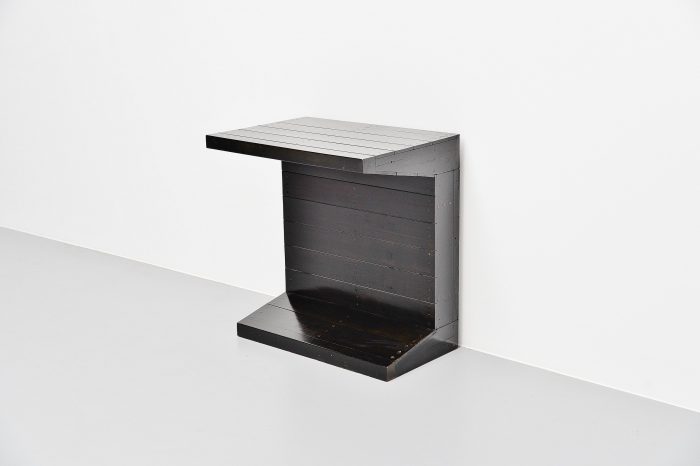 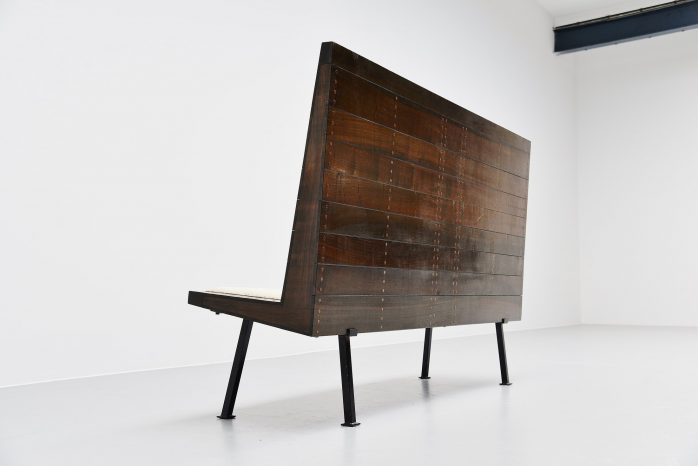 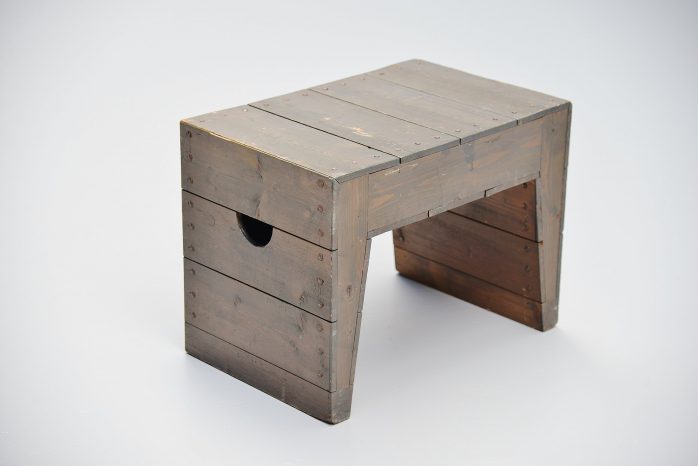 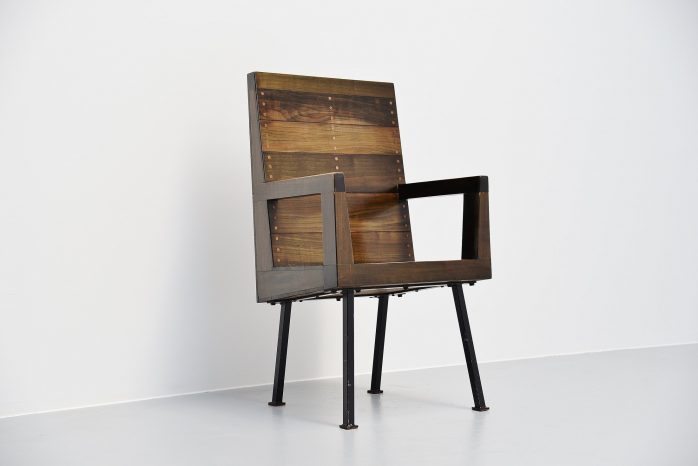 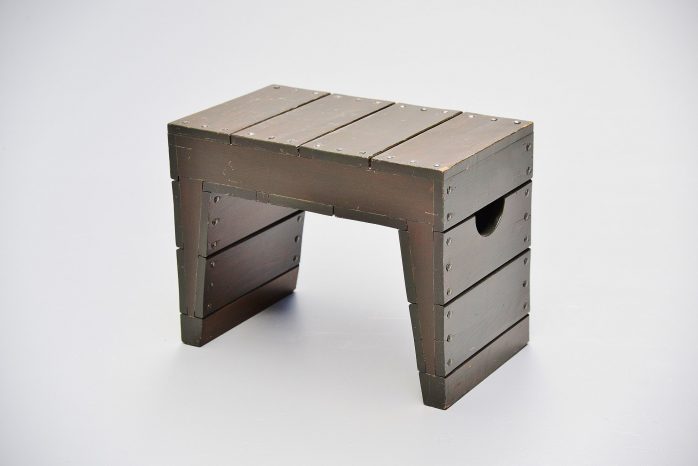